Preston Markets - then and now 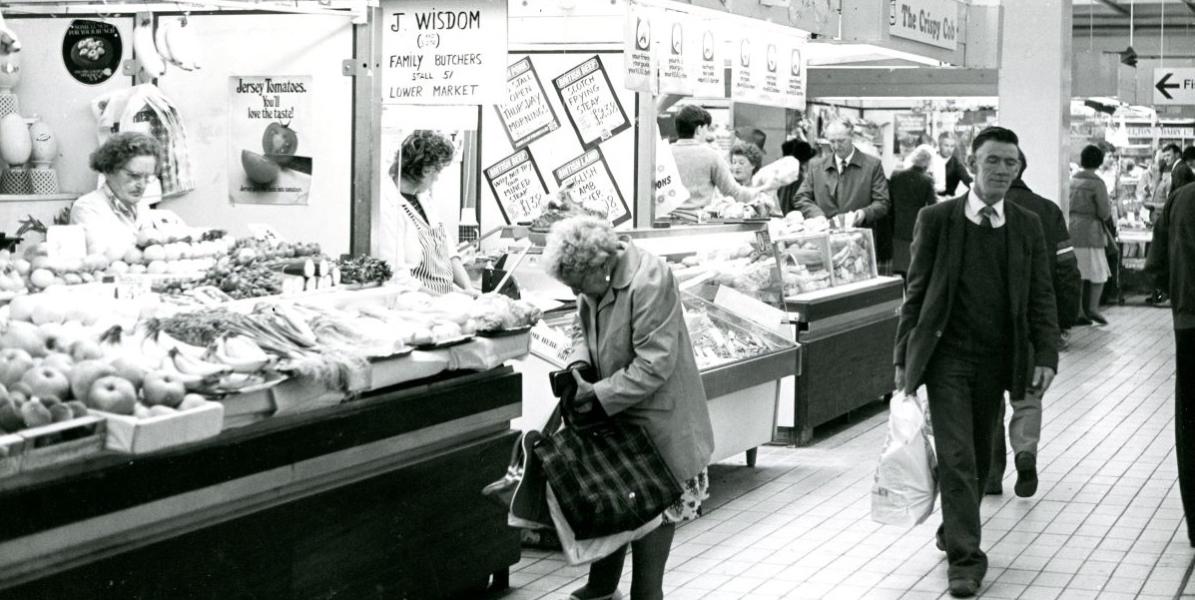 Wind back the clock and take a look at the long established trading history of Preston Markets.

At first glance, Preston Markets appears as a fresh contemporary space, though look a little closer and you'll notice it framed with an elegant Victorian market canopy hinting at its rich heritage and history. Read on to discover how the markets has evolved through the centuries into the landmark destination you see today.

Step back in time to Victorian era Preston

Step back in time to Victorian era Preston with a rapidly growing population that was tightly knit around the town centre and 700 public houses within the borough. Preston's busy evening streets were lit by gas lamps and monitored by night watchmen. The first police force was formed in Preston in 1836 and created by Sir Robert Peel, who had many ties to Preston before his time as Prime Minister in 1943. 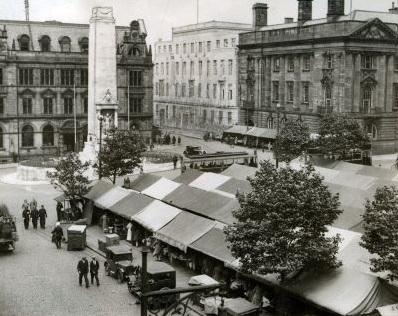 The town expanded and developed swiftly at this time with the population increasing 8-fold within the 19th century alone. In order to upgrade the amenities and improve hygiene, a sewerage system was constructed in this time period, along with a piped water supply.

Preston's history is rich and varied. From the Battle of Preston in 1715, known arguably as the last battle fought on English soil, to a visit from Charles Dickens in 1867 to recite some of his famous works. Dickens later referred to the town in his books 'George Silverman's Explanation' and 'Hard Times'.

Meandering around old Preston you would have a vague feeling of connection and familiarity to the area. Some of the buildings you see today, such as Thos. Yates Jewellers on Cheapside, were already well established in the 1800's. The jewellers were in a prime location to catch the passing trade from the old market, which was located on what is now the Flag Market, but that was about to change. With over 40 cotton mills, Preston was already a proud industrial northern town. Then, in 1838, the railway line reached Preston and brought with it a whole host of benefits for the locals, including opportunities to trade.

By 1841 the Preston Corporation had proposed a few sites for a new covered market and had started to restrict mobile street stalls ready for a change to the way the town managed its traders. Unfortunately, by 1842 they had to stop the project due to a lack of money, which was just the first of many issues to thwart the planning and construction of Preston Market. In the early 1850s, the Corporation again made plans for a covered market, but they were once again put aside.

In 1860, The Corporation formed a 'Town Hall and Covered Market Committee', which went on to obtain financing through the Preston Corporation Markets Act of 1861 and the Preston Improvement Act 1869.

After difficult negotiations between the Corporation and the Earl of Derby, who was the principal landowner at that time, it was decided that Edward Garlick, the Borough Treasurer and Surveyor would prepare a market plan and proposal to the council. Garlick started his research and visited several different counties to inspect their markets. At this time, Preston Town Centre was described as inaccessible and "choked by blocks of buildings". The market design was expected to open it up "for complete and broad approaches from every side". Ultimately, his plan was approved and put out to tender in 1870.

Joseph Clayton owner of a foundry in Greenbank Street, was the first choice to complete the work. His £6,070 tender, offered in January 1870, was the lowest submitted and a contract stipulating completion by 31 July 1870 was signed.

What should now be the end of the story is just the beginning of a series of mishaps, which meant that it was another five years before the plans came to fruition.

February and March passed by, and the site remained untouched. The Council was growing impatient. Clayton put their minds at ease by explaining that it was essential to make all the casting at his foundry before any work could begin on site. In April 1870 the first pillars were erected. Unfortunately, Clayton missed the agreed completion date and Council members began to press for a £50 a week penalty to be imposed on him.

Then, on the morning of Saturday, 6 August 1870 with 31 of the 32 pillars in place, there were ten men working busily on the canopy roof when it suddenly collapsed in on itself. One man named Thomas Bateson ,of 6 Wells Street, was seriously injured and taken to the Royal Infirmary which had only opened that year. Fortunately he made a full recovery.

This structural failure began a protracted discussion about the reason for the collapse with controversy reaching even the national trade press. Rumours that the contractor Clayton thought Garlick's design was 'over engineered' led to people accusing him of cutting corners. An investigation concluded that the reason for the collapse was that the scaffolding did not have enough support. Clayton and the Council blamed each other for this failing. Clayton withdrew from the project when his new proposals, which included more money to make it safer, were rejected.

In 1871, the Council awarded the contract to Messrs P B Bennett and Co of Birmingham they agreed to carry out the work for £9,000.

In yet another stumbling block, Bennett came forward with safety concerns over defects in the design. The Council refuted these claims and insisted on construction to the original specifications. Bennett never began work. 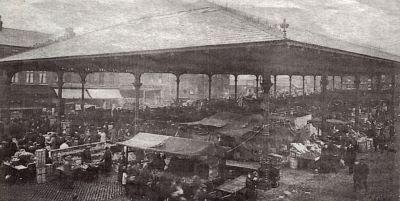 In November 1871, the Council gave the contract to William Allsup of Preston. However, Bennett did not vacate the site until April 1872. In May of that same year, Allsup was able to begin work at a cost of £9,126 and five shillings.

At this time many of the traders sold fish in an uncovered market next to the newly built canopy. The old fish market was also covered in 1924 with a canopy that replicates the style as the 1975 Victorian Canopy.

In 1958, major alterations were made to the canopies, when glass skylights were removed, electric lighting was installed and the cobbled floor was replaced. 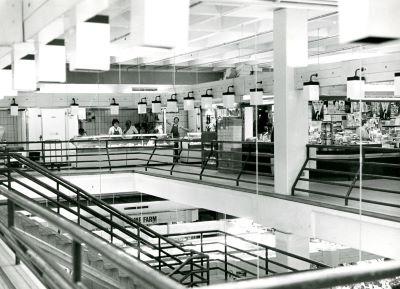 The next major advancement to be made to the Markets was in 1970 with the construction of an entirely indoor market. The concrete structure mirrored the brutalist architectural design of the famous Preston Bus Station which at that time was the largest in Europe.

After 40 years of trading, a proposal was made in 2010 to demolish the concrete Indoor market building and in its place create a different space altogether with a cinema, bar and restaurant complex. Thus, ensuring that Preston City centre stays up to date and relevant to the ever-evolving social needs of the local residents, the growing student population and visitors to Preston. Traders would be given an opportunity to relocate their stalls to a new Market Hall, or a Box Market which would be located under the Fish Market Canopy.

In 2018 the New Market Hall was successfully opened. Along with renovations to the now grade 2 listed canopies, an award-winning wooden clad and glass structure was built within the original Victorian Canopy. With its glass ceilings, the design showcases the original features and creates a light and airy feel. With a section at one end which still hosts a popular Outdoor Market three days a week, a second-hand stall once a week and various Market Fairs such as a Record Fair once every few months. 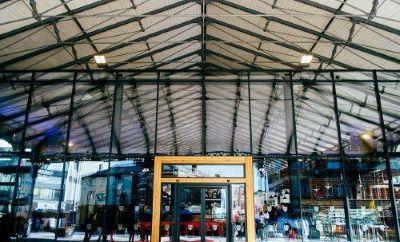 The Box Market, which is located under the old Fish Market was also opened in 2018. This is a contemporary, cluster of black, steel shipping containers that each house a local trader.

These days the markets have an excellent range of traders available, from the more traditional Prestonian fishmongers, butcher and dairy stalls to the modern café's, bespoke printers, and a cosmetics stall.

September 2021 saw the reveal of a fantastic bronze Wallace and Gromit bench statue, with Wallace in the Wrong Trousers and Gromit reading his newspaper whilst sat on the bench. This extremely popular feature, which is quickly becoming a selfie hotspot, was erected at the south Market Hall entrance to honour the franchise creator Nick Park who attended the reveal, as he originated from Preston. 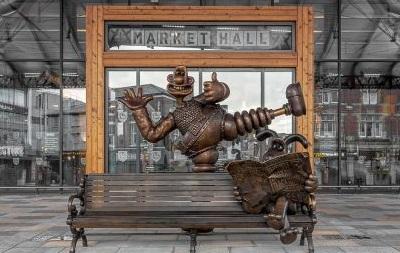 Although there have been many changes since the 1800's when the Markets were built, Preston's friendly and welcoming northern charm has remained the same - something that you will find in masses at Preston Markets.

Take a look over our Preston Market Timeline to see snapshots of key periods that shape what you see today.